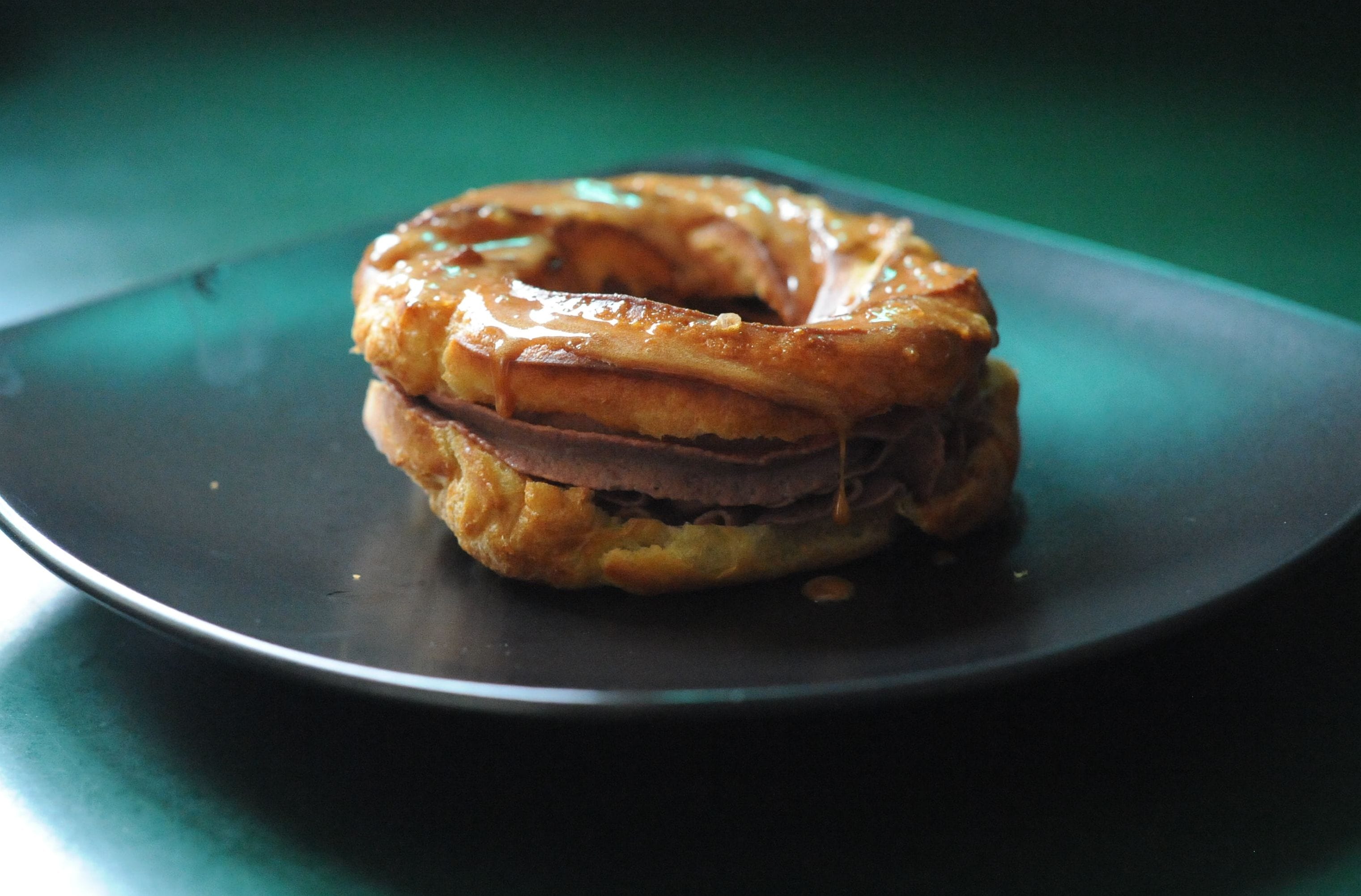 This recipe was featured in the May 2018 “Restaurants of the Year” issue of Food & Wine Magazine and it was selected as 2018’s Best Dish. When I saw the cover, my immediate thought was a glazed doughnut sandwich with chocolate cream in the middle. But when I read the article, it was quite far from that! It is a savory version of a Paris-Brest (a French dessert consisting of a choux pastry ring with praline cream, named after the bicycle race between Paris and Brest–the ring is supposed to look like a bicycle wheel). This is a dish created by Grand Café (Minneapolis, MN) chef Jamie Malone.

Instead of a sweet praline cream, this has chicken liver mousse inside. I like liver pâté, and the fact that it was named Dish of the Year by Food & Wine Magazine intrigued me.

It was quite a lot of effort, and kind of messy. I don’t have a dishwasher so cleaning up was kind of a pain. Of course you have the option of not using a pastry bag and just using a spoon for everything but then you won’t get the fancy wheel shape. And this recipe makes a lot. The recipe says makes 14, but for me it was more like 18. And they are pretty big, so unless you a) absolutely LOVE LOVE LOVE liver and can’t get enough of it or b) have a large family or party, you will be left with a lot of liver mousse and choux. I ended up making only a few and freezing the rest (liver mousse and choux dough). At least with the choux you can put cream in it and make a dessert if you want.

In the directions it tells you to make a 3-inch round for the choux, so I did that, at least to the best of my guesstimating ability. The resulting puff is quite large, and to fill all that real estate with liver mousse…is a lot of liver mousse. The initial taste is pretty good, but to keep eating all that liver became somewhat of a chore. I think the part that really makes this dish is the black honey glaze. Without the glaze this dish would fall pretty flat.

My husband, who also likes liver pâté, said it would be better if it were bite-size. I couldn’t agree more. It would make for a good bite-size appetizer. But again, for the amount of work you put in to make it, I wonder if it’s all worth it.