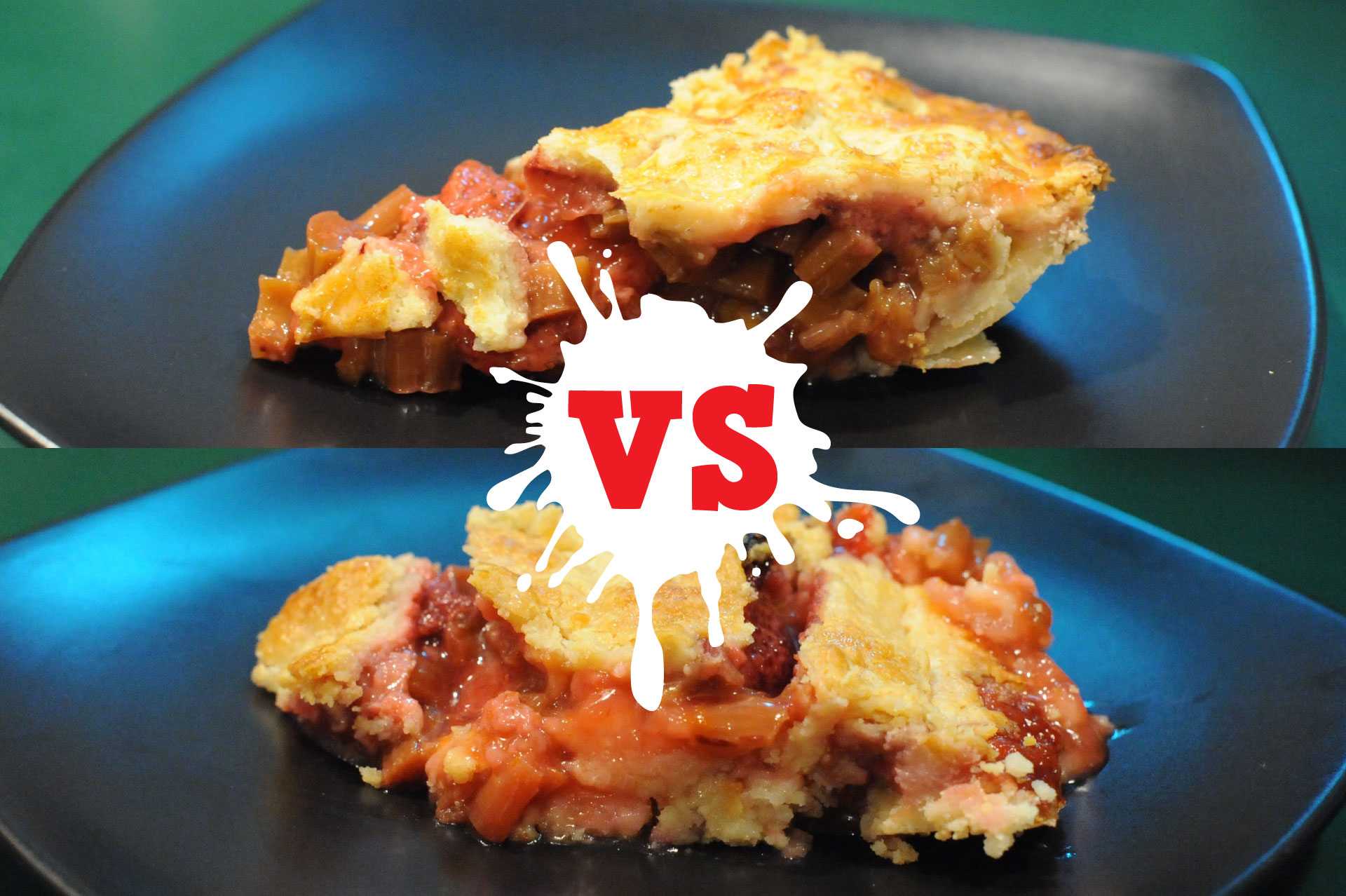 It’s strawberry season and the rhubarb is growing so there’s only one thing that I love and crave this time of year…strawberry rhubarb pie! I’ve had an ongoing battle with strawberry rhubarb pie. Every year I get enough rhubarb to make one pie, maybe two if I’m lucky. So, if I fail then I have to wait until the next year to try again. Ok, I guess I can go to the store and buy rhubarb but it just isn’t the same!

My problem with strawberry rhubarb pie is this. It’s runny and goes all over the place when you slice it. It drives me crazy! I can’t even count how many recipes and methods I’ve tried in the past. To fix the runny problem I’ve tried cooking the fruit before baking it (the texture just was not right), pouring out some of the juices after macerating (came out dry and weird), using flour (runny and grainy), using tapioca starch (still kinda runny), using corn starch (starchy)…and this doesn’t even include the endless search for the best pie crust.

This year I’ve decided to compare two recipes. One from the Smitten Kitchen blog and the other from the classic Joy of Cooking. The reason why I chose these two was quite simple. For the former, I did an online search for “strawberry rhubarb pie recipe not runny”. After seeing the blog post and the photo on the Smitten Kitchen, I thought I’d give it a try. For the latter, I chose the recipe because it’s a classic. I have two editions (1997 and 2006) of the Joy of Cooking Cookbook and for this test I used the 2006 edition.

This is by NO means a scientific comparison because I broke the number one rule in scientific research: Having only one independent variable. For one thing, the pie crust is different in the two pies and the strawberries came from two different sources (one came from a local greenhouse and the other from the supermarket…I wanted to use strawberries from the same source but when I went back to get more at the greenhouse they were sold out). I also used two different methods for the pie crust. For one I made the dough, put it in the refrigerator, rolled it out, and then put it in the freezer; for the other I made the dough, rolled it out, and then put it in the freezer (at least I used the stand mixer method for both). So yes, I super messed it up in terms of a scientific comparison, but it’s a comparison nonetheless.

Let’s start with the pie crust. Smitten Kitchen‘s pie crust is an all-butter pie crust. The Joy of Cooking recipe online says to use their “My Basic All-Butter Dough” but in the cookbook they give you a choice of “Basic Pie or Pastry Dough”, “Deluxe Butter Pie or Pastry Dough” or “Cream Cheese Pastry Dough”. The Basic Pie Dough is a more-shortening-less-butter recipe and the Deluxe Butter Pie Dough is a less-shortening-more-butter recipe. I always default to the Deluxe Butter Pie Dough recipe because I just can’t resist anything with “Deluxe” written on it. Well, that’s not the only reason. I also don’t really like the idea of using a lot of lard or shortening. On a regular basis I use refined coconut oil (refined has a much more neutral taste than unrefined) instead of shortening and this is no exception.

The Smitten Kitchen blog goes into great detail about the making of pie dough. She recommends using a hand-held pastry blender instead of a food processor. I also have tried the food processor method and was never happy with it. There is far too great a risk of over-processing the dough. However my problem is that I don’t own a hand-held pastry blender and I don’t like the idea of blending with my finger tips as Julia Child instructs in her Mastering the Art of French Cooking book. If the point is to try to keep the butter cold, using your fingers just won’t do unless you have ice cold fingers! So, what I like to do is to use a stand mixer with the paddle attachment. It gets the job done fast before the butter gets warm, but not so fast that you end up over-processing.

The glaze: Smitten Kitchen‘s recipe calls for 1 egg yolk and 1 tsp. of water while the Joy of Cooking uses milk or cream (I used cream) with sugar sprinkled on top. I’m not sure which I like better. The egg yolk one came out very glossy but the cream one came out looking more homemade. It’s a matter of taste, I think. As a home cook, I think I prefer the cream because it’s less waste than cracking open an egg just to glaze the pie.

Texture-wise, I still preferred the Joy of Cooking Deluxe Butter Pie Dough crust because it was softer. No, soft is not the right word. Fluffy but still with substance? I like pie crusts that don’t get in the way of the filling. Taste-wise, I think I also preferred the Joy of Cooking one. Whether the taste is actually different or the texture is fooling my taste buds into thinking it tastes better, I don’t know.

For the strawberry-rhubarb filling, tapioca was the starch used for both pies. Smitten Kitchen‘s recipe uses sugar and brown sugar plus some lemon juice while the Joy of Cooking is just sugar and orange zest. Proportionally, both recipes use a similar amount of sugar but Smitten Kitchen uses more strawberry and rhubarb than the Joy of Cooking. I must say, the orange zest really makes a difference. It adds a nice zing that lemon juice alone doesn’t quite live up to. The sweetness factor worked well for both probably because the Smitten Kitchen pie’s strawberries were the greenhouse ones that were small and sweet while the strawberries used for the Joy of Cooking pie were the store-bought ones that were big but not as sweet. The rhubarb for both pies came from the same plant.

Oh! I almost forgot to address the main issue at hand. How runny were the pies? Both were equally runny, but more successful than in past years’ attempts. The Smitten Kitchen pie held up a little better maybe because the pie crust was more sturdy. I don’t expect the pie filling to stick together like jello, but I also want it to not spill all over when I lift the slice out. Or is this expecting too much of strawberry-rhubarb pies? Perhaps next year I will leave the pie in the oven even longer than instructed to really, really let the filling cook and even evaporate a little. And the saga continues…