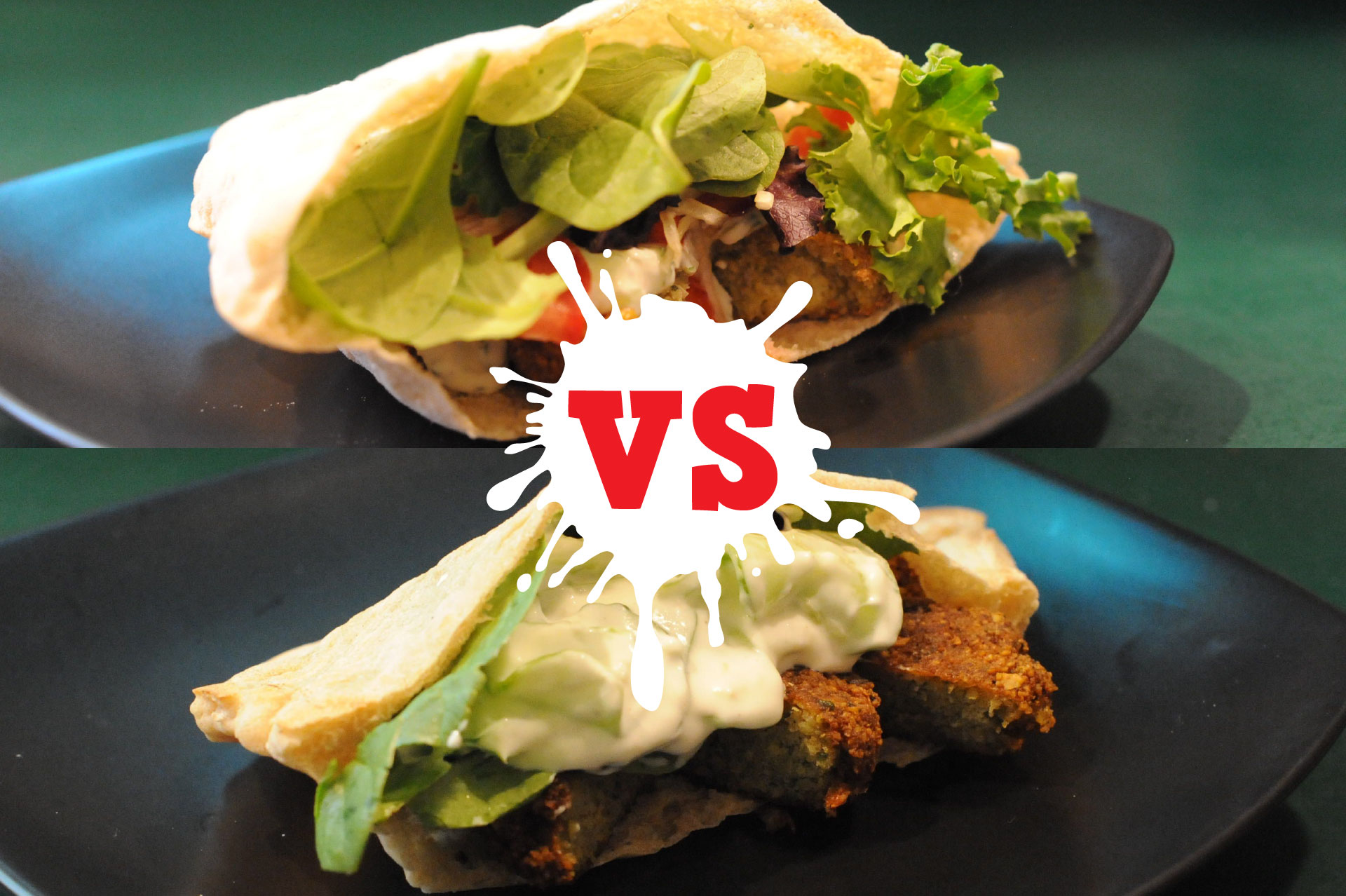 My first falafel recipe attempt a while ago was with canned chickpeas/garbanzo beans and I had since assumed that falafel was something basically like fried hummus. However, I had recently read somewhere that a REAL falafel is made with dried chickpeas that have been rehydrated. So I set out to find an authentic recipe that uses dried chickpeas. I started with Tori Avey’s falafel recipe from her blog.

I also have attempted pita bread before but it always just came out bubbly and without a nice big single pocket. What better test combination than falafel and pita bread? Originally I had meant this to be a test of one recipe, but after a rather frustrating time hand-kneading the dough with the first recipe (David Tanis’ pita bread recipe from The New York Times), I decided I had to try another recipe that allowed for the use of a stand mixer. The second pita bread recipe I found is by Yvonne Ruperti from Serious Eats and looked promising with the title “Perfect Homemade Pita Bread Recipe“. While I was at it, I decided to try another falafel recipe to mix it up a bit (Mark Bittman’s falafel recipe from The New York Times.)

Both falafel recipes were similar in that they started out with rehydrating dried chickpeas. Tori Avey calls for overnight soaking while Mark Bittman calls for 24 hours! I think overnight is plenty, but with dried chickpeas it’s good to be certain that they are completely rehydrated. The ingredients are basically the same except Mark Bittman’s recipe gives you the choice of parsley or cilantro (for this test I used cilantro) and Tori Avey’s recipe adds flour or chickpea flour. I felt that adding flour made the falafel a little dry. Because Mark Bittman’s recipe did not have flour in it, it was a little more fragile when forming into a ball/patty but once it’s fried it had a good texture, crunchy on the outside and fluffy on the inside (perhaps the baking soda also contributes to the fluffiness).

Now, the pita bread. The dough was rather sticky for both recipes. David Tanis’ recipe instructed for the dough to be hand-kneaded so I did just that. It also pointed out to try not to add too much flour while kneading. This was very hard to do as it stuck all over my fingers, but I stayed conservative with adding flour in the kneading process. Yvonne Ruperti’s recipe has an alternative of using a stand mixer so I jumped at the opportunity and used my stand mixer.

In hindsight, the problem with using a stand mixer for this dough is that it’s easy to let it do its thing without the need to add more flour. When kneading by hand, you are somewhat forced to add more flour and at the same time you are feeling the texture with your hands. Maybe the resulting dough using the stand mixer was a little too wet.

The baking process was also a little bit different between the two recipes. Tanis instructs to put a heavy-duty baking sheet, large cast-iron pan or ceramic baking tile in the BOTTOM shelf of the the oven and heat the oven to 475°F, while Ruperti instructs to put a baking stone on the TOP oven rack at 500°F. For this test I used a steel baking plate. Why? I owned two ceramic baking stones before and took good care of it (made certain never to submerge it in water or put the stone through contrasting temperatures too quickly) but they still broke. Like, one day I just lifted it and it split in half. I bought the steel baking plate a few years ago and it works like a charm. Plus, it’s indestructible!

Anyway, the oven rack placement. Usually with different recipes baking the same thing there might be a slight difference, as in middle rack as opposed to lower-third for example. But top and bottom? That is a huge difference. The bottom I could actually understand, because a lot of pizza recipes will tell you to place the baking plate/stone in the bottom rack. But the top? Despite my doubts I did it anyway, and it was a disaster (which you don’t see in the video). Ruperti instructs to place the pita onto the stone top side down. Unless you are using a pizza peel, there is no way you can place the flimsy dough on the top rack without actually pulling the rack all the way out. I don’t know if fancy ovens these days have the ability to pull the rack out all the way without it falling off, but with my oven you can only pull it out about halfway. That leaves me about 4 to 5 inches plus hardly any space on top because it is on the top rack. So with this amount of space, you have to somehow place the pita (a 7-inch circle) on there quickly without touching the hot oven or having the floppy and sticky pita dough fold on itself. I fortunately didn’t touch the hot oven, but the dough did fold and wrinkle. I tried a few times and it just wasn’t going well at all so I eventually lowered the rack.

The other minor difference between the two pita recipes is that Ruperti calls for charring the pita bread in a hot cast iron skillet on the stove. I understand and appreciate this extra effort, but by the time I was done wrestling with baking the pitas, I just wanted to eat them.