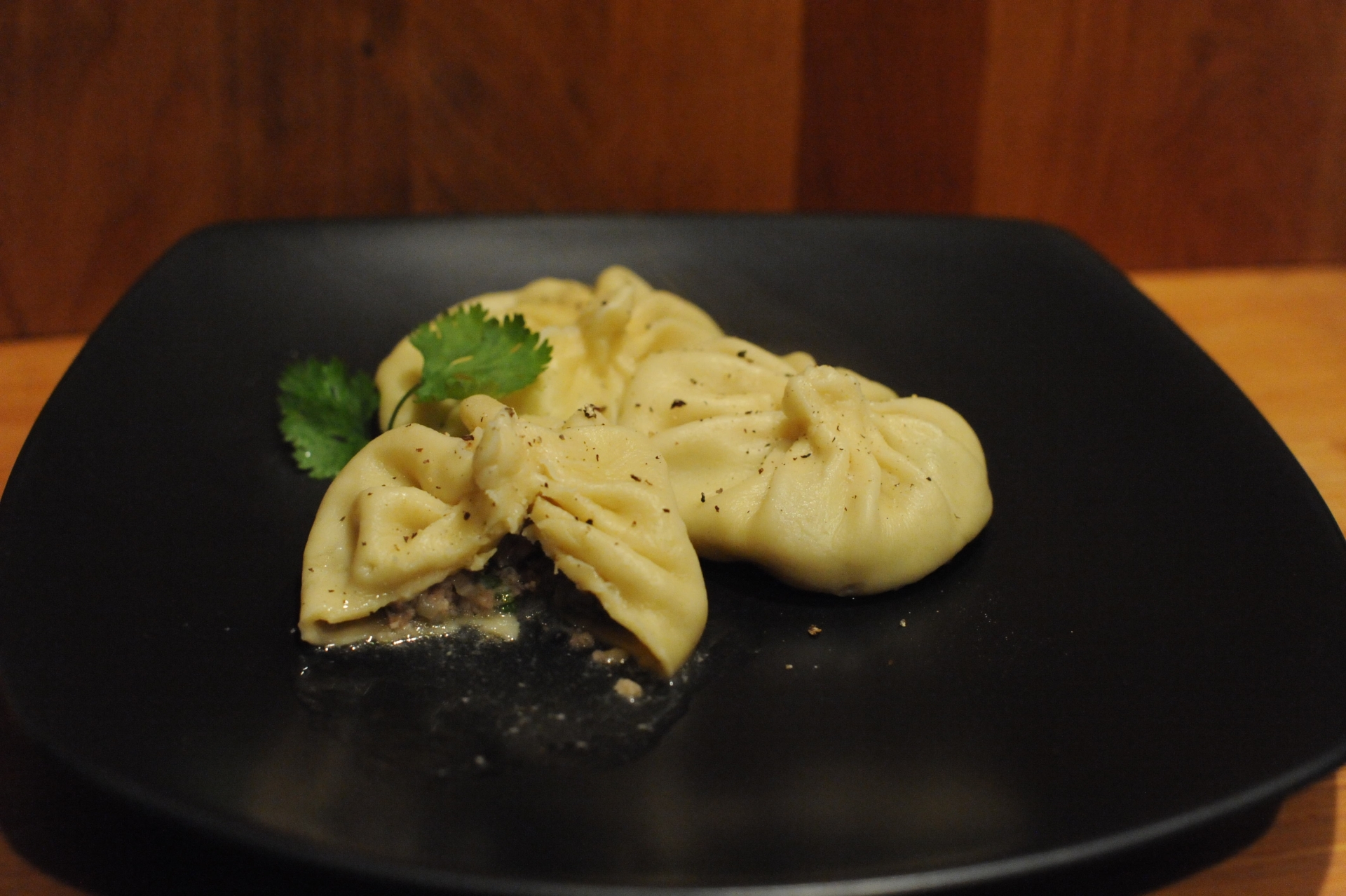 It seems like every culture has some version of dumplings, regardless of whether it is called that or not. Dumplings can be served with or without a sauce, in a soup, pan-fried, deep-fried, boiled, with meat, without meat…the possibilities are endless. This Khinkali recipe (Georgian dumplings) by Carla Capalbo was featured in the October 2018 issue of Food & Wine Magazine. In the note it tells you that the dumplings are eaten by hand, held by its stem. A small bite is taken from the side to first suck out the broth and then the rest is devoured while the stem is discarded. I have never experienced such a thing (discard the stem) but after eating it, I realize why. In a sense, these are a Georgian version of soup dumplings!

I tried to throw away all notions of what I normally know as dumplings (Chinese and Japanese dumplings) and followed the recipe which starts out with making the dough. It all went innocently enough, mix the ingredients, knead until elastic and let rest. After making the meat filling which seemed an awful lot of water (this is probably what makes it a soup dumpling), I continued to the next step which was to roll out the dough for wrapping.

This is where I got royally confused. It said to divide the ball into thirds, shape into a ball, roll out to about a 1/4-inch thickness, and then cut out 8 dough circles with a 2.5-inch round cutter. It didn’t specify whether the 8 dough circles were per divided ball, or in total. The serving size says “Serves 8”. Serves 8, meaning how many dumplings per person? I don’t know about you, but I could easily eat a giant plate of dumplings which equals well over a dozen dumplings.

Anyway, I rolled the dough out to about a 1/4-inch to see how big the dough ball got. It only came out to maybe fitting two cuts out of it before I had to move on to the next dough ball, so two circles out of 3 dough balls would only yield 6, plus maybe two more if I put all the scraps together. That can’t be right, one dumpling per serving? Besides, it says to place about 1 Tbsp. of the meat filling in each one. There is definitely more meat filling there than just 8 dumplings. So then I tried rolling it out a little thinner, maybe to about 1/8-inch. The dough is  resilient and as I was doing this over and over it got more and more resilient as the gluten developed so I got frustrated and in the middle started to use my pasta roller.

I ended up rolling it out on the thickest setting of my pasta roller which is about 1/8-inch thick. At this thickness, I was able to get about 14 rounds out of it. Then as in the instructions, I rolled it out to about a 4-inch circle and the meat filling pretty much was perfect for 14 dumplings (I was pretty generous with each one, maybe a heaping tablespoon). Maybe what they meant was two dumplings per serving, so I was supposed to end up with about 16? Who knows.

Other than that, the rest was a cinch. Boil, top with fresh cracked pepper and serve! The notes say to hold it at its stem, take a bite on the side to suck out the broth and eat the rest, but I preferred biting it little by little until you got to the bottom pocket which was filled with broth. Best bite for last! Maybe I’m breaking some cardinal Georgian rule with that but I enjoyed it most like that.