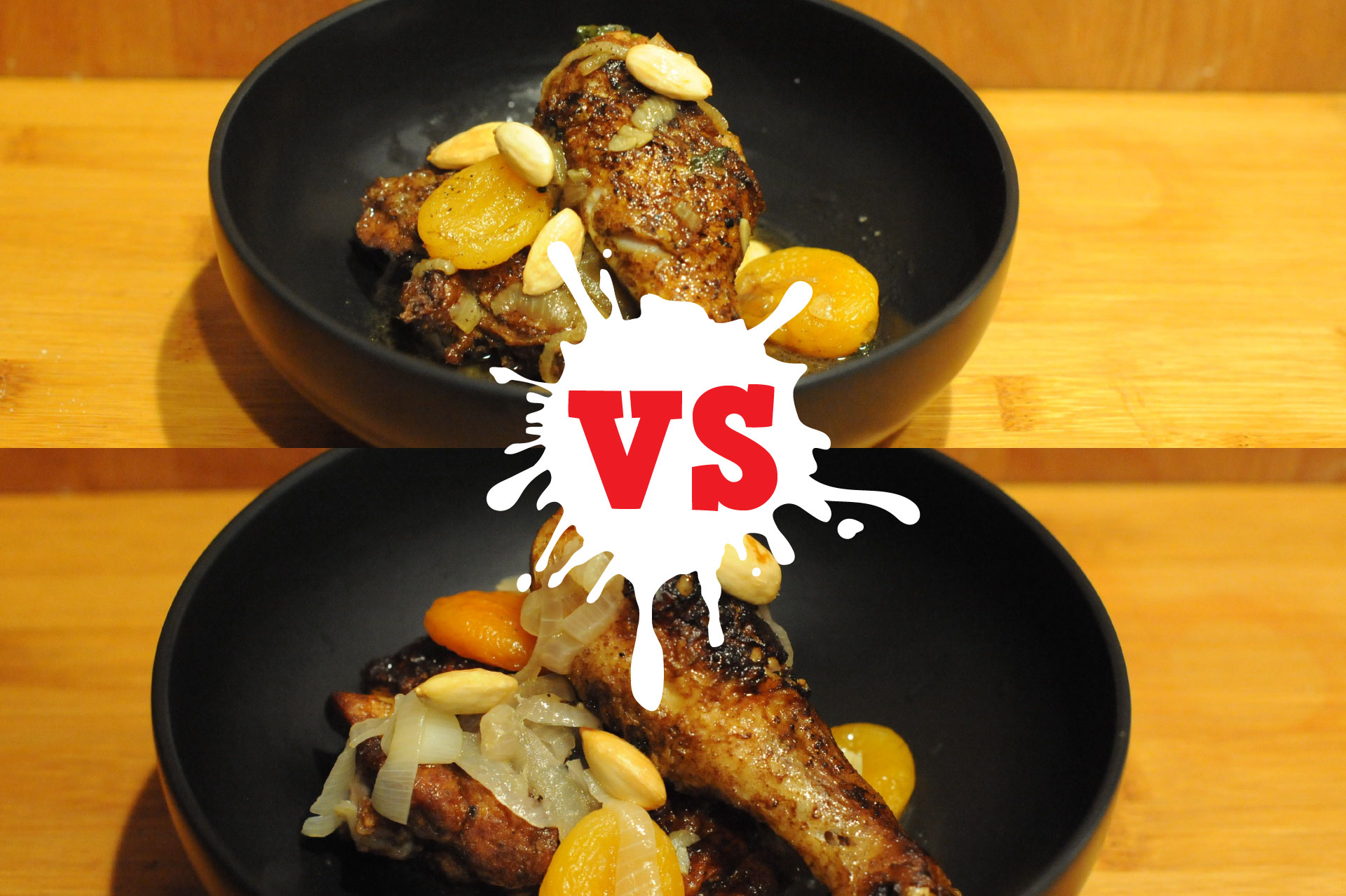 Chicken Tagine with Apricots and Almonds

I recently inherited a tagine. I had heard about them and knew in theory what they do, but had never used one before. I searched for tagine recipes, but I found that a lot of them will say it’s a tagine recipe when in fact it’s just a recipe that uses Moroccan spices and cooks in a dutch oven. You can’t call it a tagine recipe without using a tagine! So then a search for how to cook with a tagine ensued.

In my short research I found that tagines cannot be put through quick temperature changes or they will crack. I figured as much from using pizza stones. I had also read that the tagine should be placed in a cold oven first with all the ingredients in there, that water need not be added and that the meat and/or vegetables do not necessarily need to be browned or sautéed first. I decided to do the inaugural tagine test with the Chicken Tagine with Apricots and Almonds recipe by Baija Lafridi on Epicurious. This recipe gave the option of using a tagine or skillet, and it said to brown the chicken first. I wasn’t completely comfortable placing the tagine on the stove (especially on my crappy electric one) so I decided to brown the chicken in a skillet first and then split the recipe in half: one half done in a tagine without sautéeing the onions and garlic and without the added water, and the other half following the recipe in a skillet.

Originally I set out to do this entire recipe in the tagine. The recipe said to use a 10- to 12-inch tagine or heavy skillet so at first I thought, hey, perfect! But after getting all the chicken pieces out I thought, there is NO way all this chicken is fitting in there WITH the onions. Probably when they say 10- to 12-inch tagine, they mean the diameter of the bottom, not the widest part. My little tagine was about 10 inches in diameter at the widest part but maybe 5 inches at the bottom. So basically I only had room for half. I realized this after already coating the chicken in the spices so I figured I’ll do half in the tagine and the other half in the skillet and see if there is any difference.

I placed the raw sliced onions and garlic in the tagine with the tied parsley and cilantro and put the browned chicken on top. Then I placed the tagine in a cold oven and set the oven to 325°F. Another piece of information I found in my research was that a tagine should only be heated up to 325°F or 350°F in the oven. Since it’s also being started from a cold oven, I let it cook in there for an hour as opposed to just half an hour in the covered skillet on the stove.

And the result? I didn’t anticipate much of a difference, but there actually was! The taste was much cleaner in the tagine, probably because it was less greasy. The chicken was also more juicy and tender, and packed with more flavor. Don’t get me wrong, the skillet version was good too. But the tagine just elevated the dish even more! I’m impressed. I can’t wait to use the tagine again! The apricots and almonds, although seemingly unnecessary were indeed a necessary component to the dish too. The almonds were so light and crispy, and I was glad to have made the extra effort to blanch them (check out how to blanch almonds here!).