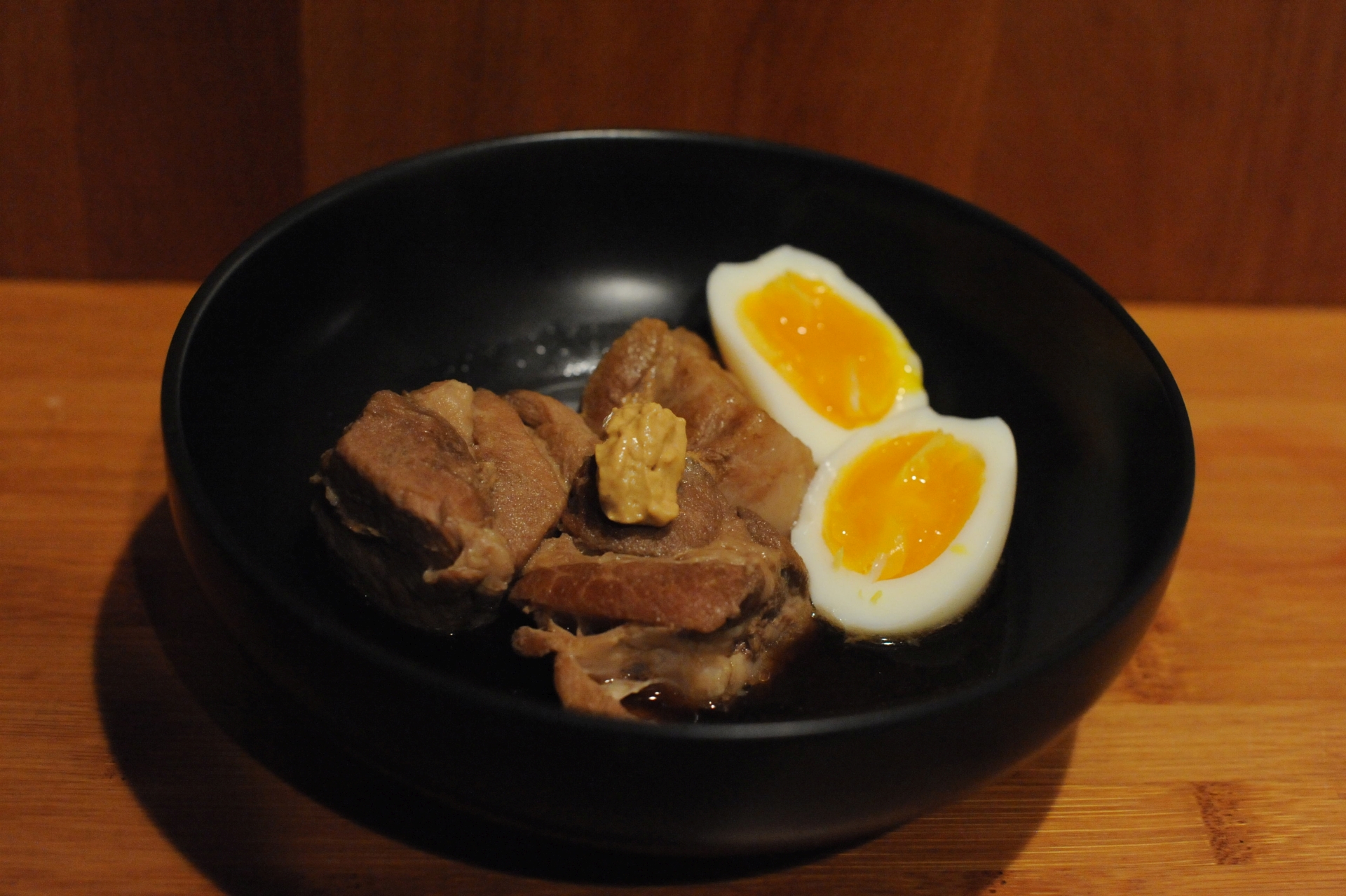 One of my all-time favorite Japanese home-cooked dishes is the Buta-no-Kakuni which literally translates to “pig square/angular braise”. Normally pork belly is used to make this dish and pork belly can be found quite regularly in Japanese supermarkets. Around where I currently live, the local farm sometimes has it seasonally (usually sells out fast and you have to buy a whole belly which is a lot) and the local supermarket very occasionally has it, but otherwise pork belly gets turned into bacon almost straightaway. Therefore, I often use pork shoulder instead. It still has the fattiness and holds well after being simmered for hours. This is definitely not the first time I have made this dish, but I was intrigued by Tadasuke Tomita’s recipe on Shirogohan.com (translates to white rice dot com) for two reasons: One that it is titled “A Foolproof Buta no Kakuni Recipe/How-to”, and two that he boiled the meat for a while in rice rinse water (which I will explain below) before actually simmering it in the soy sauce mixture.

When I make this dish the usual way, I’m used to browning the meat first and then simmering. This recipe instructs to take rice rinse water and boil the meat in that for 30 minutes, then turn off the heat, close the lid and let sit for 30 minutes. This step is repeated three times, so in total the meat is boiled for 1.5 hours and resting for 1.5 hours. The second and third times, the boil is at low heat with the lid partially ajar.

Some of you may be asking what is rice rinse water? Rice rinse water, or Kome-no-Togijiru (米のとぎ汁) can be used in various ways and some Japanese people swear by its benefits. The idea primarily is to utilize the nutrients that are in the water after the rice has been rinsed. Some uses include (and I kid you not) a face mask or rinse, a floor wax, seasoning a new clay pot, fertilizing plants, soaking oily pots and pans, and last but not least, as a boil for vegetables which produce a lot of 灰汁 (lye) or 臭み (smell, or stinkiness for lack of a better word). Japanese cooking is sensitive to this stinkiness that comes from meats and vegetables, so the scum that floats to the top when boiling is often scooped out for a nice clean taste.

Surprisingly, this recipe specifically says that scooping the scum is not necessary during the boil. And as he says, the scum dissipates anyway after the second or third boil.

The resulting pork is very tender and clean. Normally this dish can be quite oily, and in the past what I’ve done is to make it the day before, let it cool completely so that the fat hardens and is easy to scoop out. However with this recipe’s method, the pork has already been rid of excess fat so when it is cooking in the soy sauce mixture, the resulting sauce is very clean. This is not to say that the meat is not fatty anymore. It is gloriously fatty, just not oily.

The recipe also specifically instructs to let rest and then warm up again before serving. The resting allows the flavors to really soak in and it is worth the wait. My favorite is to put a big dollop of Karashi (Japanese mustard) on top and devour it with a hearty bowl of hot steamed white rice.