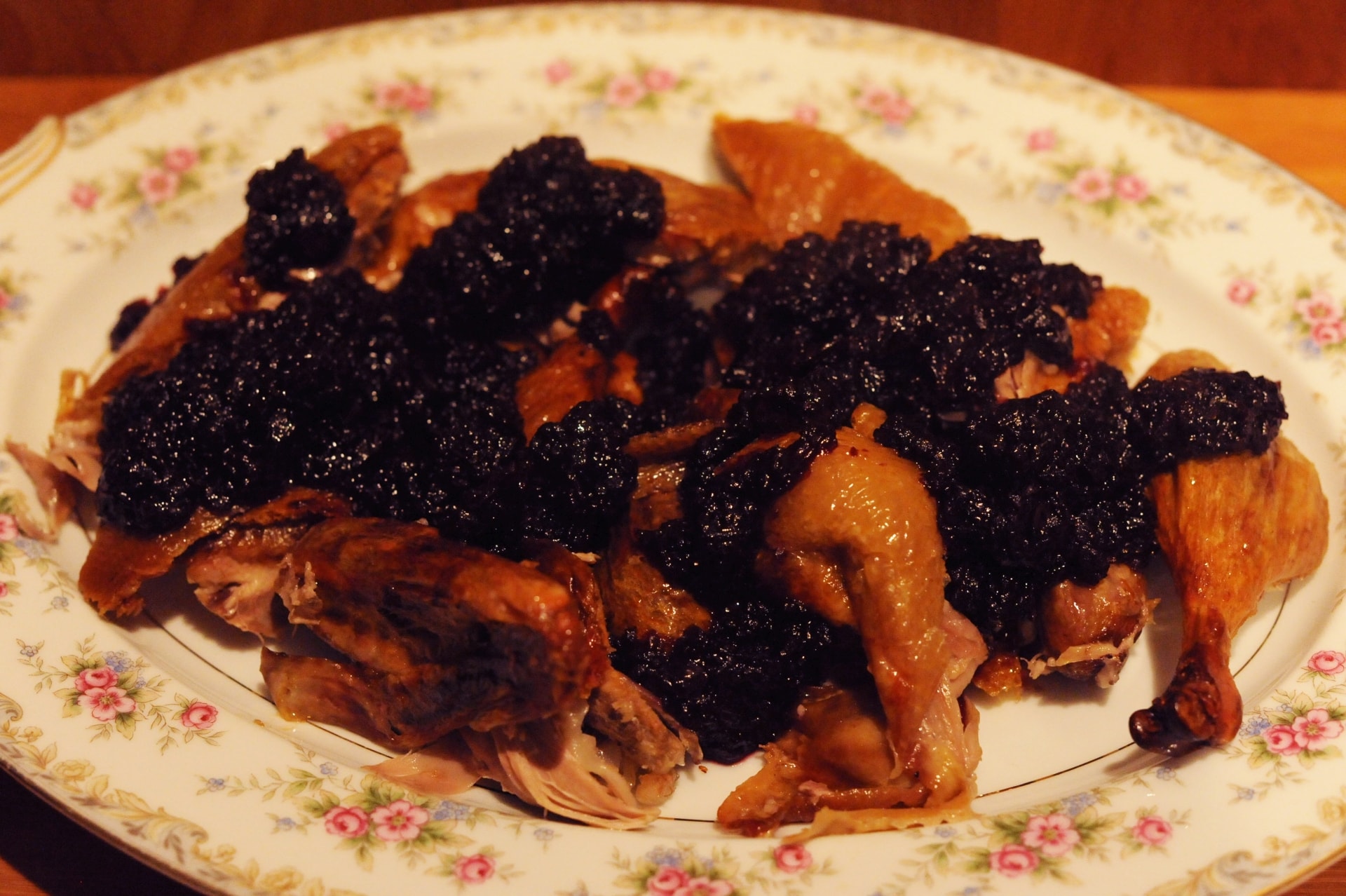 A family member requested a while ago that I do a duck recipe of some sort, but duck isn’t available year-round at least in our neck of the woods, and it seemed rather extravagant to make duck without a special occasion. Nonetheless, it stayed in the back of my mind and what better time to make roast duck than the holidays when all kinds of poultry are available at the supermarket! I searched through all different kinds of recipes and was interested in this one from the New York Times by Nigella Lawson.

I have never in my life cooked a duck, be it roasting, frying, steaming, whatever. I’m also not great at meats. It just seems so daunting, as if so many things can go wrong.

The sauce in this recipe is rather simple, just apple, onion, blueberry, brown and white sugar, star anise, zest of lime and orange, and vinegar (it calls for white wine vinegar but I didn’t have any so I used red wine vinegar).

For the duck it just said, “Place ducks on a rack in a roasting pan”. I really hate it when a recipe just assumes you know what you are doing.

Just placing the duck on the rack did not seem right for a few reasons. The wings and neck flap just kinda flopped down so it touched the bottom of the pan which I didn’t think would be a good idea. Even if it is glaringly obvious that the bird should be trussed, it would have been so much more reassuring if it said “Truss the duck and place on a rack…” Just four more words would have made a world of difference.

Usually what I do with a chicken is tie a string over the thigh and around the bottom to tuck the skin in and then tie the legs. Then I fold the wings up so it stays there nice and snug. The problem with the duck was, both ducks had just the right wing clipped at the first joint. One of the wings tucked in nicely, but the other clipped one did not stay tucked and flopped down. It must be to keep the ducks from flying away from the farm. So, I had to somehow tie the wings together with the neck flap which I have never done before. I kept searching on the internet for ways to tie the wings and couldn’t really find anything. My hands were already slimy from handling the meat and my phone was getting dirty so I just got frustrated, stopped searching and just kind of tied it.

The other part of this recipe where I wish I had some reassurance was the salt. There is no salt in the sauce or on the duck. When something is out of the ordinary like not having any salt, I need a little reassurance! All you had to say was “do not salt the duck” or something like that. Anyway, good thing I didn’t add salt because somehow the duck salted itself(?!) It was a miracle!

Overall though, for a first attempt at roasting a duck I was pretty pleased. The skin came out nice and crispy, the flavor was good, and the sauce went very well with the duck.