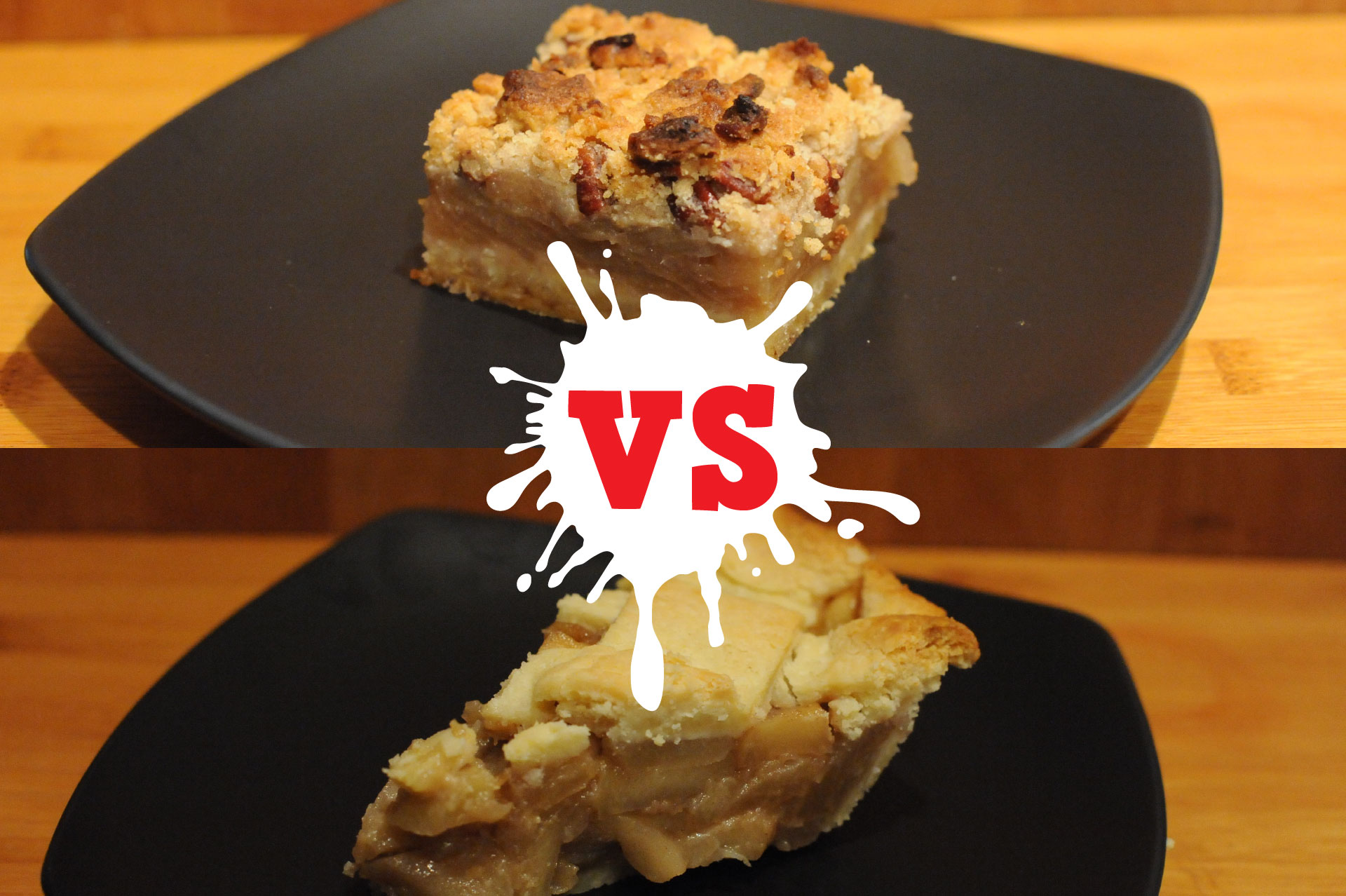 The New York Times posted Apple Pie Bars on Instagram and claimed “These Apple Pie Bars are actually as good as apple pie. It’s a big claim, yes, but this is a great recipe. They’ve got a buttery crust, a juicy filling, all the flavor, and are a lot less work for when you’re tight on time.” A lot less work, huh? I had my doubts so I decided to give it a go. To compare, I made regular apple pie using the recipe from the Joy of Cooking cookbook.

I started with the Apple Pie Bars. I’ve made lemon bars before and it’s typical to mix the flour and butter (in the case of lemon squares, confectioners sugar is often added in too) and immediately pat it down into the pan and bake. As I was following the recipe for these apple pie bars, I quickly realized that the dough was rather sticky and it stuck all over my fingers as I tried to press down into the pan. The frustrating part was that it was sticky but flaky at the same time so I couldn’t use a spatula to spread it. I tried to use plastic wrap but that didn’t work well either. I ended up putting it in the refrigerator for several minutes and pat it down.

The apples were sliced quite a bit thinner than I am used to (1/8 inch). I gather the reason for this is to make a nice dense layer so that when cut into, it keeps the pieces nice and square. It may look neat, but I think it made for a mushy middle. If you prefer a mushy apple pie then I guess it’s fine but personally, I like having bits of apple.

The topping was probably my favorite part of this apple pie bar. It made a nice crunchy layer. I was afraid it might be too spiced up, but I think it was just the right amount of spice for a nice fall day and a dollop of vanilla ice cream or whipped cream.

The apple pie recipe is a classic recipe from a classic cookbook. I think it’s hard to go wrong with such a basic recipe. I like this apple pie because it’s not too saucy or mushy and there are chunks of apple adding to the texture. The flavoring is also very simple, just cinnamon.

Maybe it’s really a matter of preference. If you’re into squares and bars, the apple pie bar would be great. I don’t think it’s a substitute for apple pie though. I think the adage, “If it ain’t broke don’t fix it” does apply in this case.

To wrap this all up, was the apple pie bar recipe “a lot less work”? I timed how long it took me to make each recipe (including peeling and coring apples, excluding baking), and the verdict is:

Sorry New York Times…in my case it was not any less work. Could it be because I’m used to making pies? Who knows.