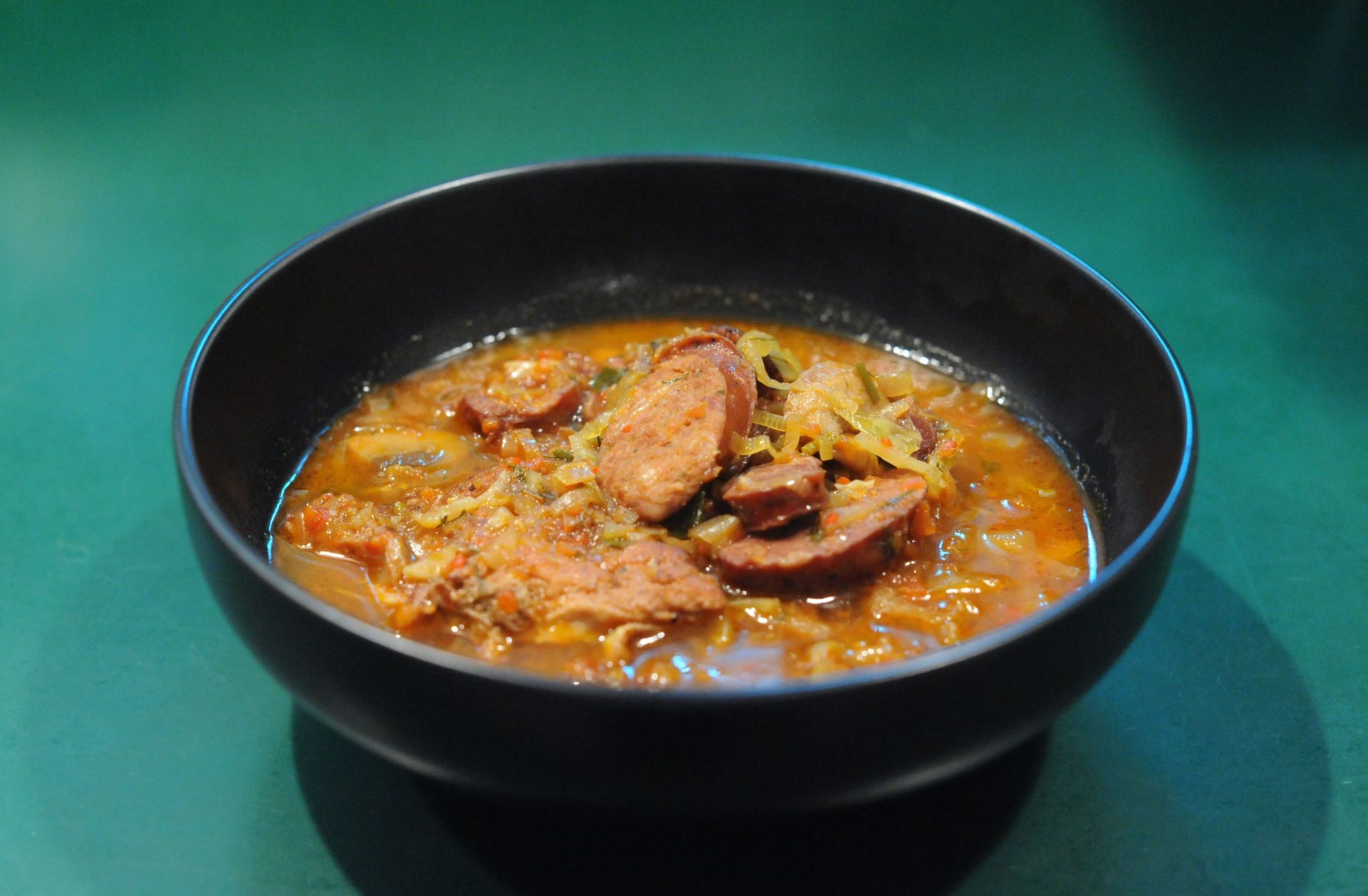 This Hunter’s Sausage-and-Sauerkraut Stew is a Polish “Hunter’s Stew” by Chef Andrew Zimmern featured in the April 2018 issue of Food & Wine Magazine. I tore the page out of the magazine and saved it for later so it was just the recipe and no description. The whole time I was under the impression it was Hungarian but then I visited the recipe online which did have a short little backstory and found it was Polish! The taste reminded me very much of a traditional Hungarian chicken paprikash and Hungarian mushroom soup.

I like the smokiness that comes from the charred red pepper and I could see this being good with other kinds of meats and sausages. I felt that the success of this recipe depends on a few things:

One, the quality of the paprika. I used a Kalocsa Hungarian sweet paprika which was the only kind I could find at the supermarket. It served me well but if I can find the Pride of Szeged paprika, I would prefer it.

Two, the quality of the kielbasa. Luckily where I live there is a big Polish population and getting good kielbasi is relatively easy to come by. There is nothing more disappointing than a sausage that claims to be a special kind of sausage but only tastes like just another plain sausage.

Three, the bacon. I am spoiled to be able to get bacon smoked locally and sliced to the thickness of your liking. A thin bacon just will not do for this stew.

And last but definitely not least, the sauerkraut. Growing up I thought sauerkraut was just the stuff they slop on top of hot dogs. And then I discovered that it is used as a topping, side, filling, and/or key ingredient in a multitude of dishes and realized that there is a difference in store-bought and homemade sauerkraut.

Making sauerkraut is ridiculously easy (check out my recipe here and watch the above video to see how it’s made), and the most laborious part is slicing the cabbage. Before I bought a food processor I sliced the cabbage manually with a knife which took FOREVER. I don’t have much space in the kitchen for appliances, but I am very glad I got a food processor that has a slicing and grating plate.

I felt this recipe is a good starting point for this type of stew and has lots of room for personalizing. I probably won’t be saving the recipe but will definitely remember it as a guideline for the next time I want to throw a bunch of meat into a stew. Given that this stew reminded me a lot of Hungarian paprikash and Hungarian mushroom soup, it begged for a dollop of sour cream which gave it a nice tangy taste and took the edge off of the paprika and saltiness from the kielbasi.