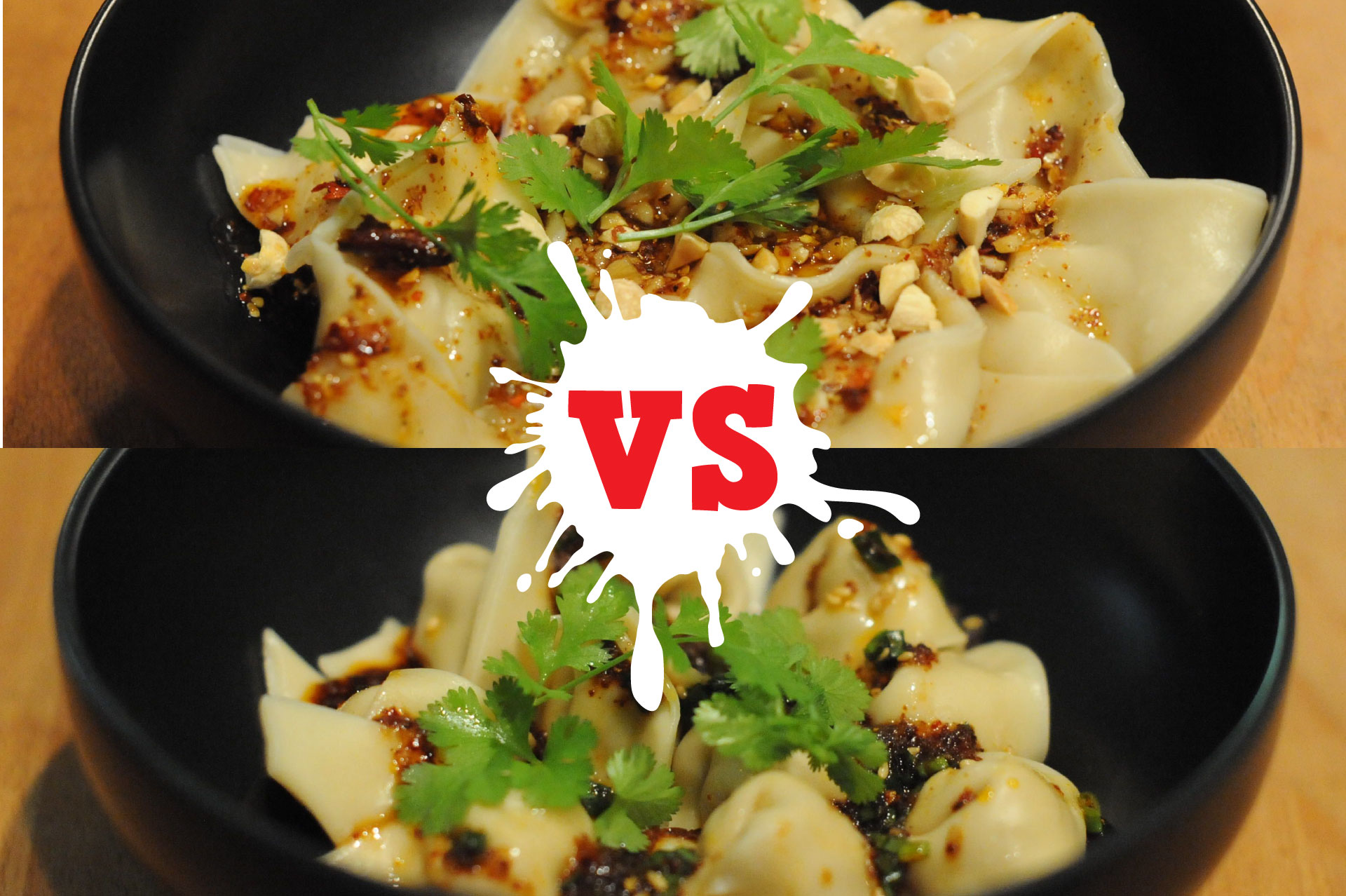 I did mention I love Sichuan food, right? Yes. And I love dumplings. Well, what are we waiting for?!

The Sichuan Spicy Wonton in Red Oil or Suanla Chaoshou (红油抄手) was something I just stumbled upon while looking for Sichuan food recipes. Both J. Kenji López-Alt’s Sichuan-Style Wontons in Hot and Sour Vinegar and Chili Oil Sauce (Suanla Chaoshou) recipe on Serious Eats and Maggie’s Sichuan Spicy Wonton in Red Oil (红油抄手) recipe on Omnivore’s Cookbook looked divine and I couldn’t judge which one might be a better recipe by just looking at it so it was time to test both for another Amy’s Test Kitchen shootout!

Maggie’s recipe, as I found out along the way, was more complicated than Kenji’s. If I had the chili oil and flavored sweet soy sauce made in advance, the effort level would have been comparable.

Let’s break the recipe down into elements.

The meat filling. I gather that the meat is kept simple because it’s all about the sauce. Maggie explains that the aromatic water which consists of water infused with scallions, sichuan peppercorns, ginger, and salt, is meant to add flavor without compromising the texture. I appreciate the extra thought, but I didn’t quite get the extra flavor. It also made the meat mixture quite soupy. If biting into a piece of ginger or garlic is an issue, I would just grate them and knead the meat well. With the sichuan peppercorns you can grind it to a powder and add it in. And with the scallions…I dunno about you but I kinda like having bits of scallion in my dumpling meat. Kenji’s recipe was also pretty pared down with just salt, sugar, white pepper, scallions, garlic, and Shaoxing wine. I’m not sure why he decided to leave out ginger, it’s one of my favorite flavors in dumpling meat. Well, next time I make this I will add in ginger.

Wrapping the dumplings. I find filling and wrapping dumplings to be kind of therapeutic, just standing there filling each one and wrapping them, usually watching a food show on Netflix. I guess sitting would make it easier on my knees after a while, but having a dog and wrapping dumplings on a low table…not a good idea. Anyway, I tried Kenji’s recipe first and since I printed out the recipe instead of looking at it from a device, I didn’t go to the “see here for more detailed step by step instructions” link which would have shown me pictures and detailed instructions. So I ended up doing the ends wrong–they should have been crossing over rather than attached at the ends like I did. For Maggie’s recipe I actually followed it on a device so I watched the video. Although Kenji’s wrapping method (make a triangle by sealing the sides and bring the corners together) is only two steps and easier, I liked Maggie’s wrapping method better for three reasons. First, putting the meat in the corner, rolling up and then sealing the side made the filling more secure. Second, the way the two end flaps were brought together rather than crossed over made the filling more tightly cinched. And thirdly, the resulting shape was more like a spoon and it was great for scooping up the sauce when eating.

The sauce. The all-important sauce. I am torn about the sauces between these two recipes. Kenji’s is a little more vinegary and light compared to Maggie’s which was thicker and sweeter. Maggie’s had more complex flavors due to the flavored sweet soy sauce and the Chinese five spice (don’t use a store bought mix, make your own!) but I really liked Kenji’s too because I like a vinegary sauce. This all depends on personal taste.

Garnishes. Kenji’s recipe calls for optional roasted peanuts and cilantro when serving. Maggie’s recipe calls for optional tablespoons of hot water from cooking the wontons and cilantro, some toasted ground Sichuan peppercorn flakes, and toasted sesame seeds. I didn’t add the cooking water but I did add the cilantro and sesame seeds. Her chili oil recipe already has sesame seeds in it so adding more sesame seeds was a little redundant. I really liked the peanuts because it added crunch, nice flavor, and the cilantro is a must (unless you don’t like cilantro of course).

All-in-all, both were very good in their own different ways. Personally though, I liked Kenji’s better. It was a very close one!